In this tutorial you will learn to split cell horizontally in google sheets.

When working with a spreadsheet we come across some common tasks on a daily basis. One of such tasks is splitting cells in a spreadsheet.

Below are some practical use cases:

You got the idea. These are some of the common tasks if not some advanced tasks like splitting a paragraph having a special character in it.

In google sheets, you can use 2 methods to split a cell. Using the SPLIT() function and the inbuilt “Split text to columns” action in the menu bar.

The split function in google sheets divides text around a certain string or character and puts each fragment of the divided text into different rows.

text – The text to split.
delimiter – Define the string or character where you need to split the text.
split_by_each – [ OPTIONAL – TRUE by default ]

If TRUE then each character in the delimiter string will be considered while splitting
Example:- If the delimiter is the word “fox”, then the sentence will be split wherever it finds “f”, “o” and “x”

Here is a quick example to understand this better

Here the SPLIT function will split the text in A1 into two parts. Before and after the word “cell”.

The split_by_each parameter is set to FALSE. This will tell google sheets to consider the whole text as one delimiter.

Try yourself what happens when you make the third parameter in this example TRUE instead of FALSE.

You can achieve this same result if you want to use the shortcut from the menu.

You can also split the text in a cell horizontally using the menu shortcut.

To split text to the column using the menu shortcut :

1. Open google sheets on your computer and select the cell to split

3. Choose the Separator from the drop-down options

4. Use a custom option to split using certain words or character

5. The text in the cell will split horizontally into columns

Here is a demo animation showing this in action:

Google sheet recently introduced this shortcut to split text. And it comes in very handy.

You just learned how to split cell horizontally using the SPLIT formula and menu shortcut.

As you can see using the =SPLIT(A1,”-”) formula, we can split A1 into two columns. One containing the serial number and another with the employee name.

Using the menu shortcut method, you can do the same. Below is a quick animation showing the same:

Go ahead and try to do this for other cells in column A.

We have a text in cell A1 which has employee names separated with “|” symbols. We want to split and list the names vertically like below:

Here is how to do it:

Apply this formula in cell C1 to get the output as shown in the picture.

Using the same SPLIT() formula, you can split a text in a cell at multiple characters.

The key to splitting with multiple characters is to ensure the split_by_each parameter is set to TRUE. Though it’s TRUE by default, make sure it is.

Example – Split by a comma in google sheets

Let’s say you have a cell with text like this:

To split the text in cell A1 at each comma character, you can use the menu shortcut method or the SPLIT formula method.

Let’s use the menu shortcut method.

Select the text and then click on Data > Split text to column. Google sheets will automatically detect and split the text in cell A1 into multiple names and will fill them into adjacent columns.

If it does not detect automatically, you can choose the “Comma” option from the Separator drop-down.

This is how you can split a cell text having commas in them.

Similar to this example of splitting cells by comma, you can now split cells by any characters you need.

Consider the below list of data in cell A.

Some rows have age in them and some do not. And you want a list of only names and genders.

Let’s see, how can you achieve this?

If you use the regular SPLIT formula to split cells by space, then you will get the results like this.

Since we do not want the third column, we can include a small query formula to select only Columns 1 and 2 from the result and display them.

Here is the formula:

And here is the output

Here the array formula will ensure the formula is applied to all cells at once and you do not have to drag the SPLIT formula across rows.

The query formula will select Col1 and Col2 from the results and that will be the output of this combined formula.

How do you split first and last names within the same cell in google sheets?

You can split cells with first and last names by using space as the delimiter.
Here is the formula and example
=SPLIT(A1,” “) 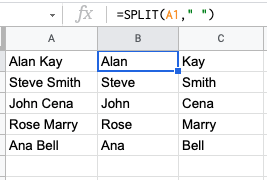 Note: You can use the array formula which will apply automatically for all cells in Column B.


How to split a cell in google sheets into last name and first name?

We saw how to split the cell by First and then the Last name. To do the reverse, you can use the QUERY formula.
Here is the formula:
​​=query(split(A1:A5, ” “),”select Col2, Col1”)
And here is the result in action:

How do I split only the dollar amount from one cell to their own cell in google sheets?

To split a cell with a dollar as the delimiter you can use the same SPLIT formula and choose to have the dollar symbol ($) as your delimiter.

In google sheets split the number at beginning of the cell?

To split the text in a cell at the beginning of the cell, you need to use the SPLIT formula in combination with either the RIGHT or LEFT formula to pass the position of the character in the text.

How to split cell after 4 characters in google sheets ?

The LEFT function tells the SPLIT formula to split at position 4 from the left-hand side. In this case, that character is “-”.


How to split the date and time in a DateTime cell google sheets?

how to split a cell in reverse order in google sheets?

To split cells in reverse order, first split them in the normal order and use the QUERY formula to select the data in the reverse order.
Refer to the example of Last name and First name shown in this guide.

In this guide, you learned how to split cell horizontally in google sheets. Also, you saw examples of splitting cells vertically, with commas, with special characters, and many other ways.

You also learned how to use the SPLIT function in combination with ArrayFormula and Query function.

As you work with more unstructured data in google sheets, these methods will come in super handy to structure and format your data.

Get the latest articles on all things data delivered straight to your inbox.